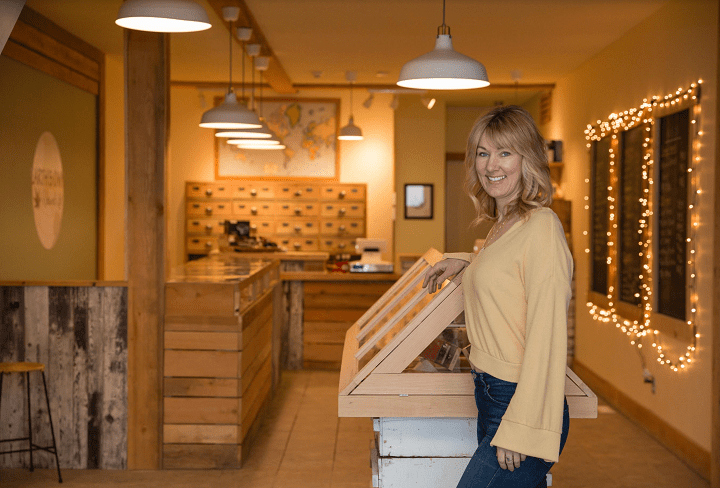 Laurie Weitzel is the owner of Earth’s Own Naturals Ltd., a store in Kimberley, BC named as a way to honor the cannabis plant and the earth in which it grows. Initially opened in Jan 2017, ‘Earth’s Own’ recently reopened after acquiring British Columbia’s second cannabis retail license.

Laurie optimistically continues to pursue a vision of cannabis as a means to better people’s quality of life–one that ultimately started with her late husband Chris being diagnosed with esophageal cancer.

Upon Chris’ diagnosis, Laurie and Chris chose to change their lifestyle to incorporate a strict organic Paleo diet, to seek a hospital that focused on increasing a healthy immune system, and for Chris to ingest cannabis oil extracts daily.  This led them to Sanoviv, a cancer treatment hospital in Mexico, Their experience with cannabis would leave Laurie with an impactful and long lasting memory of Chris saying that he would prefer 10 good days of life, rather than 6 months of sick, bed ridden days.

“Sanoviv was a 9 week lesson on how to live life; It was important for Chris to find his quality days”
– Laurie Weitzel

Returning to Kimberley, Chris’ quality of life improved through the regular use of cannabis oil and the couple eventually found that Chris’ esophagus cancer was disappearing. Their relief would not last, however, as Chris’ liver would ultimately lead to his passing on November 29th, 2015.

However, before Chris’ passing they had approached Kimberley’s city council and requested a business license for his vision of a cannabis retail store. He explained his story of how much cannabis helped him in his fight against cancer and that same evening, he left with the council’s unanimous decision to grant their business permit.

In trying to find a location, Laurie was pleasantly surprised to find that an ideal space was owned by the Skookumchuck Workers Memorial Hall Society. Having worked as a millwright at the Skookumchuck pulp mill for 16 years, and has been a union president for a time, the society was supportive of the new retail store opening the Cannabis Dispensary in January 2017.

“The current president told me that Chris did a lot for the union and they would help me out wherever they could. They even had his memorial celebration of life picture up of him in the back office.” This is where we needed to be – Laurie Weitzel

Although Chris passed away before the store could open, cannabis had given him comfort during these days and improved the quality of his time so that he could check off some bucket list items. After, Laurie would carry on Chris’s vision to allow others to benefit from cannabis as he did. And having been a former business owner of a property/strata management company, Laurie was familiar with the process of opening and running a business successfully.

Beginning in the grey market

“It was very important that this business was run like any other business. We were all in a precarious situation and the thought was if we communicate well with the community and we all know what is going on, then hopefully none of us would be blindsided by unexpected events.” – Laurie Weitzel

Laurie would incorporate “Earth’s Own Naturals Ltd” in November 2016 and open in January 2017. Aware of the various risks for the store and the community, Laurie reached out to her local mayor and chief of police. They would start meeting regularly to discuss regulation and how it would affect the municipality, the RCMP, and Earth’s Own Naturals.

“There [continues to be] zero incidents with the RCMP around our store, the community has accepted us being there, and both parties feel that our business is for the betterment of the community. ” – Laurie Weitzel

It was with the approval of the city council, the municipality, and support from the community that Earth’s Own Naturals came to be. The entire community was coming together to support Chris’ dream. Through it all, Laurie paid careful attention to her store’s internal community as well. She carried on a lesson from her parents that “the staff are the best assets to a business” and made sure to operate her business like a partnership, alongside her team. Laurie would take care of her staff, and in turn the staff provides their best service to the customers.

“In the unregulated dispensary days, we spoke to our clients about health in general. I would often share the kind of modalities offered at the Mexican hospital where [Chris] was treated.” – Laurie Weitzel

The transition to legal retail

Laurie’s close cooperation with the municipality and community would soon pay off once legalization came around, as a warm and positive public consultation process undoubtedly played a major role in Earth’s Own Naturals obtaining BC’s second cannabis retail license.

As a part of their transition out of the grey market and in line with her store’s team culture, Laurie involved her entire staff to select a POS system together–and the team unanimously selected Greenline POS.

“We all thought it was simple and easy to use.” – Laurie Weitzel

After reopening, Laure soon noticed that their customer base had changed. Before, customers came in for pain relief, now many of their customers were recreational tourists coming from the US, Europe and Alberta. Laurie expects their older customers to return in the fall once they’re able to restock on some old favorites including concentrates and oils. Until then, she holds true to her belief that quality service and teamwork builds the foundation of her success among a new clientele.

Through their transition, Laurie appreciates Greenline’s transparency and ability to work with her store’s culture and community.

“I just send compliance updates to [Greenline] and I don’t even need to think about it! I know it’ll be good to go when I need it.” – Laurie Weitzel

Laurie started Earth’s Own Naturals with an optimistic vision for the future that could better people’s quality of life. This is the belief that lies deep at the heart of Earth’s own naturals–a name Chris chose to reflect the couple’s appreciation for organic and natural products. It’s in this spirit of community that helped bring together the city, old colleagues, staff, and customers to make Chris’ vision a reality.