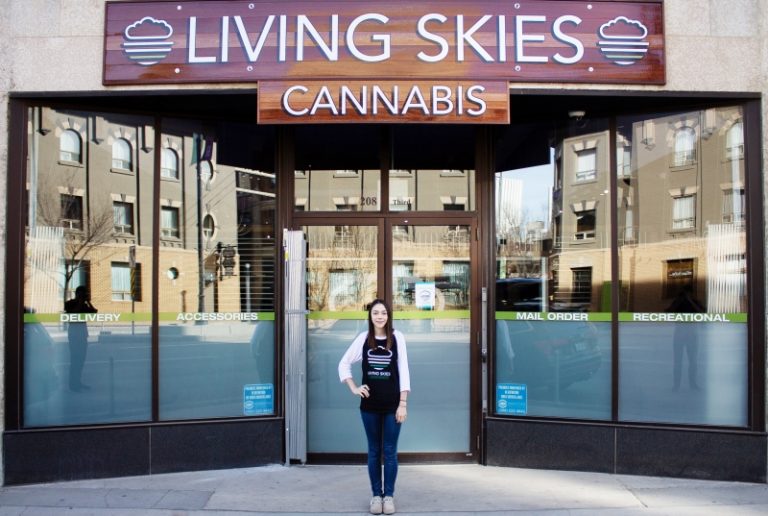 The Canadian cannabis community is changing and we believe the future of cannabis retail lies in integrating with, and serving local communities. ‘Living Skies Cannabis’ is one such Canadian retailer that was founded on the principle of understanding and serving their community. As one of Saskatoon’s best cannabis retailer, founded by Canada’s youngest Cannabis retailer, Cierra Sieben-Chuback, her store ‘Living Skies Cannabis’ prides itself on local expertise and community ties. Their prime location in the heart of downtown Saskatoon helps them stay in the middle of the action as the one-stop-shop for all cannabis needs. However, beneath the surface lies a far more community-oriented business model, driven by Cierra’s local expertise, and love of her hometown.

“I wanted to open a cannabis store more than anything, and maybe that’s why I got it; It showed.” – Cierra Sieben-Chuback, Owner of Living Skies Cannabis

Two days before beginning her last round of university finals, Cierra was driving to Regina at 6:00am to submit her Cannabis permit application to the Saskatchewan Liquor and Gaming Authority (SLGA). She would be competing against 165 other candidates for one of seven city permits. Despite still being a student, she knew this was what she wanted to do. As a user of medical cannabis after being diagnosed with Rheumatoid arthritis in 2016, the thought of running her own retail business began to emerge as a way to help others in the same way that cannabis had helped herself. As she completed her degree in business operations, she began drafting a business model for her envisioned cannabis store.

“I realized that I can’t afford to live without commiting to the things I care about.” – Cierra Sieben-Chuback

Despite being met with skepticism there was no time to be discouraged, as about two months later she heard back from the SLGA that she had received a permit, which realized her ambitious goal of opening as soon as possible (once legalization came into effect). Inspired by her father, an entrepreneur who dropped out of school to support his family, she started her process of incorporating and establishing her business with no time to waste. Her journey eventually led her to Hempfest that August, where she first came in contact with Greenline POS — however, circumstances would lead her to use Shopify instead.

“I always intended to use Greenline, but Shopify offered me a deal I couldn’t refuse.” – Cierra Sieben-Chuback, Owner of Living Skies Cannabis

Approached with a deal from Shopify to supply her with the POS hardware and software required for free, she leapt on the offer to save thousands of dollars in initial costs. It would take a few more weeks to get everything set-up, after which she was ready for the SLGA compliance inspection. As a part of compliance, every order and movement of cannabis supply needs to be thoroughly tracked and reported–from opening inventory, sales, theft, destruction, to detailed closing reports. However, Shopify did not meet these compliance reporting needs.

“It was messy, but I thought it was good enough.” – Cierra, Owner of Living Skies Cannabis

In the following weeks, Cierra contacted Shopify support but they were unresponsive. Legalization was two days away, and with Shopify’s responses taking several days and with no solutions in sight, she made the choice to contact Greenline POS.

Cierra needed the right software with compliance expertise, and she needed reliable communication to ensure that she could open as soon as possible. Shopify had sold her on a great deal, but the software was not the right fit for cannabis compliance, and their customer support did not understand her specific needs as a cannabis retailer. After scheduling a demo, we had her ready to use Greenline exactly three days later on October 17th, exactly as legalization came into effect.

“I had no idea a software company could be this responsive!” – Cierra Sieben-Chuback, Owner of Living Skies Cannabis

When Cierra contacted us, we knew we needed to work fast to help her out. While not our primary supported product, we also made sure that Greenline POS was compatible with her existing hardware.

“We work closely with our customers to make sure they are prepared for the grand opening, no matter how tight the timelines are. Greenline POS is not just a service, we aim to be an integral part of your customer’s team.” – Calvin Ho, COO Greenline POS 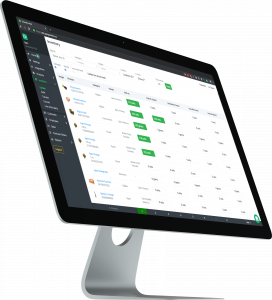 POS software choices can make or break operations, and cannabis retailers need a POS that works alongside them to simplify and reduce their operations without adding roadblocks.

Upon opening, many of our customers encounter the growing pains of launch. Through it all, Greenline POS works alongside retailers as a part of their team to catch and resolve problems with minimal issues. Specifically, we provide:

We have also found that stores are likely to make mistakes inputting purchase order details–so we’ve made it easy to fix mistakes at any point of the process without needed to redo purchase order details. Additional features that enable our customers to work more effectively are always a high priority for our service–and for Cierra, we worked to integrate her Moneris payment processing units directly into our POS system. Akin to Cierra’s community-focused values, at Greenline POS we care about providing an all-in-one, bullet proof experience for our retailer partners. We recognize that retail stores are not perfect environments – managers and staff make mistakes all the time.

“We built our POS to work for the real world. A big part of that is being able to correct mistakes made in the pasts in a way that maintains accountability and compliance.”- Albert Kim, CEO Greenline POS

In the future, Cierra intends to switch to our current hardware due to it’s pleasant design and clean presentation–which provides a solution to the chaotic wiring of her current setup. When she does, Greenline will be ready to help her through that transition as smoothly as possible.

‘Living Skies Cannabis’ opened early December and Cierra promises her customers quality products and reliability as one of Saskatoon’s finest cannabis retailer. To do so, Greenline POS provides quality service and reliability–this is our promise to our customers.

Every day, we work with successful, independent cannabis retailers and we understand how to help you succeed. Our service is built with the intention to work as a part of your team, not just as a POS system. We have set the foundation to ensure your success and efficiency by providing incredible expertise and service that suits your specific needs. Whether you’re needing support or requesting a new feature, we’re always available to work with you. Since our founding, we’ve dedicated our POS to becoming the bullet-proof solution for the Canadian independent cannabis retailer. The Canadian cannabis community is changing and we are dedicated to serving our community’s needs better than anyone else on the market.